Identical Twin DNA Testing - How it works and the results

Genome scientists working for the DNA Legal laboratory, Eurofins Forensik, have overcome a stumbling block that DNA testing has faced since its inception; how to distinguish between identical twins.

Aside from looking alike, it was also considered that identical twins shared the same genetic makeup, causing numerous criminal investigations to collapse. Cases of sexual assault from Marseille to Michigan, drug-trafficking in Malaysia, and a jewellery shop heist in Germany have all been dropped owing to the inability to tell twin suspects apart. Forensic DNA testing had failed.

However, we studied the differences between DNA samples of a set of identical twins and one of their biological children. The researchers were not given the child’s parentage, but were instead challenged to uncover the genomic differences between father, son and uncle using  bioinformatic analysis.

They uncovered a crucial clue: five mutations in cross-generational hereditary chromosomes that distinguished identical twins. That’s just five mutations in a three billion letter sequence. The diagram below demonstrates the minute scale at which these distinguishing code strands begin to appear: 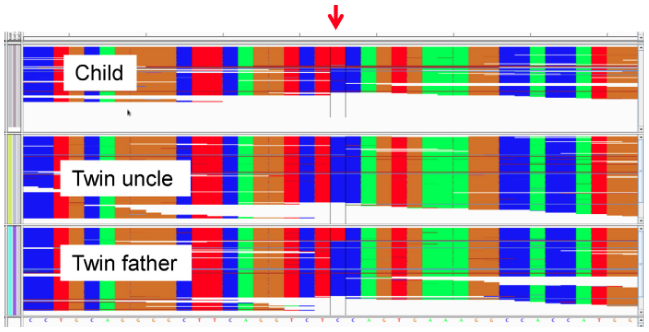 The clue here is the missing red-coloured coding in the uncle’s read-out, which is present in both the father’s and the son’s. This shows there is a miniscule genetic variation between the father and the uncle - the identical twins - which is known as Single-Nucleotide Polymorphism: a variation in the sequence differing to its comparison strand by a single letter. The reason, no doubt, why we opted to title the project Finding the needle in the haystack.

The next stage of the study was a close, detailed examination of the somatic differences between DNA samples from the identical twins. In identifying these differences, the team could determine the type, amount and patterns of genetic mutation after the twins had separated. Washington University’s Genetic Institute provided the VarScan software - a tool noted for its extreme read depth - to decode and sequence these differences using common labelling models. Our lab estimates that 2.8 terabytes of data passed through the software package during the research.

The process had been proposed in previous studies, but it was considered a mammoth undertaking. The amount of code required to locate the ‘typos’, as described by Eurofins’ Dr Georg Gradl, dwarfs the strand sizes examined in usual DNA analysis - 400 versus billions, according to La Provence’s science correspondent.

These findings have opened up significant new territories in DNA forensics, with courts now able to accurately pinpoint guilty parties, even between identical twins. The Boston Herald has reported on a suspect who was identified, indicted and successfully charged of sexual assault after the new testing had been applied.

Other DNA testing firms all over the world have tried to solve this riddle, but have not been able to do so with requisite levels of accuracy. We, however, are confident that our discovery looks set to close a major legal loophole. For more details and for any questions on the range of testing we offer, please call 0203 4243 470.