Judges and courts across the country have been faced with the inability to order expert evidence in private family law cases including DNA, Drug & Alcohol Testing. Concerns have arisen about court delays, risk to children and the very outcome of cases as a result of the lack of expert evidence provided.

Due to the concerns highlighted above, a pilot scheme was introduced in June 2014 by the Ministry of Justice. By working with the Her Majesty’s Courts and Tribunals Service, Cafcass, OFM and DNA Legal were able to produce and maintain an expert evidence pilot. Expert evidence was only supplied if the judge deems it to be “necessary” for a case to be resolved successfully.

The administration of the expert evidence is supported by Cafcass, Oxfordshire Family Mediation and the testing was provided by DNA Legal.

Was the expert evidence beneficial during the pilot?

The biggest benefit of the additional expert evidence, was the reassurance of a decision that would be made based on unbiased evidence. It was noted that judiciary were more confident in their decision making, as expert evidence provided a clear scientific indication as to what the situation was.

Without the expert evidence, professionals reported that the judiciary would have make to make a difficult decision as to what the welfare of a child should be. Orders that had been made with a lack of expert evidence were perceived as less likely to be followed by the parties. It is thought that the cases will return to court as the real issues were not originally dealt with, this could've been avoided with the help of expert evidence.

“I am determined that all cases involving children should be resolved quickly and wherever possible outside court. However when they do come to court they should be resolved in a civilised way so that children don’t suffer. Unambiguous and conclusive DNA Tests will prove parentage and help to end acrimonious and embarrassing court battles."

What was the impact in court?

All test results were delivered to the court on time. The added evidence meant the court could confidently structure a timetable with greater assurance of case being concluded. During the pilot procedures became clear and less time was devoted to explanations.

Number of tests ordered and completed 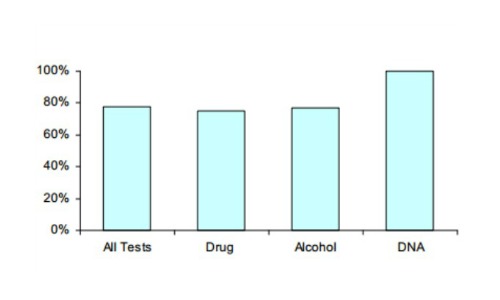 This analysis shows that 75% of drugs test, 77% of alcohol tests and all DNA tests were completed and returned to court. This may show the importance of the DNA testing procedure, as questions were raised about parentage, the outcome was deemed essential in determining a correct outcome

What challenges did the pilot face?

It was welcomed by all professions at the added increase of DNA, alcohol and drug testing during this time period. However there were some challenges that were faced. DNA Legal faced difficulties in obtaining the correct information from courts to complete a test. The main obstacle was the refusal to be tested by various parties, however this was only noted on a small number of cases.

It was initially understood that the pilot and the legal aid would split all costs for DNA, alcohol and drug testing. However during the pilot no costs were actually split with the pilot funding the costing of the tests in full.

What's next for the pilot scheme?

The main aim was to help benefit the court in their decision making process was has been a success with DNA Testing now being made available in family courts from September 2015.

The pilot will need to be modified to improve its efficiency and DNA Legal are supporting a further period of evaluation for Drug & Alcohol testing.  This pilot could revolutionise how expert evidence can be provided on a nationwide basis that can be cost effective and productive for all involved.

If you would like to know more about the Expert Evidence Pilot and how we can help you, please call us on 0203 4243 470. You can also view the Ministry of Justice report here